Hector Vasyli was an 11-year-old Brisbane newspaper boy and altar boy in 1918.

He was the son of a Cypriot-born father and Australian-born mother who ran the then Queensland Oyster Palace in South Brisbane, which stood a short distance from the then Victoria Bridge.

Hector Vasyli was fatally injured on June 9, 1918 when a vehicle carrying returned servicemen over Brisbane’s Victoria Bridge swerved into him to avoid ramming another car in the procession.

Hector Vasyli was among a crowd of people welcoming sick and injured soldiers en route to a military hospital at Kangaroo Point.

He was rushed to a nearby hospital for treatment but died before getting help. 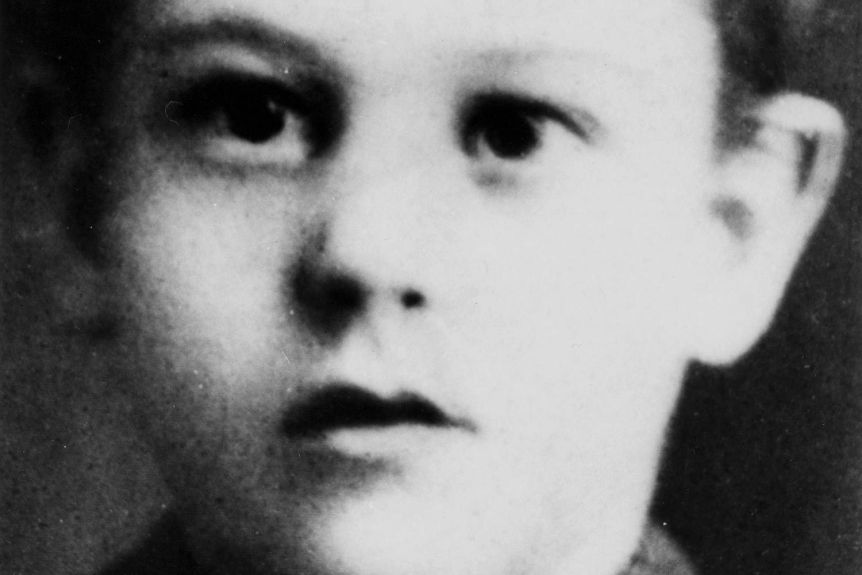 According to an State Library of Queensland senior research librarian Christina Ealing-Godbold, it has been reported that:

“Hector had a habit of collecting his pocket money and spending it on cigarettes, chocolates and flowers to give to the returning troops,” she said.

“We might look back and think cigarettes weren’t good for these injured soldiers, and chocolate was probably worse, but in those days it was just a sign of respect and knowing the luxuries they missed out on during the war.” 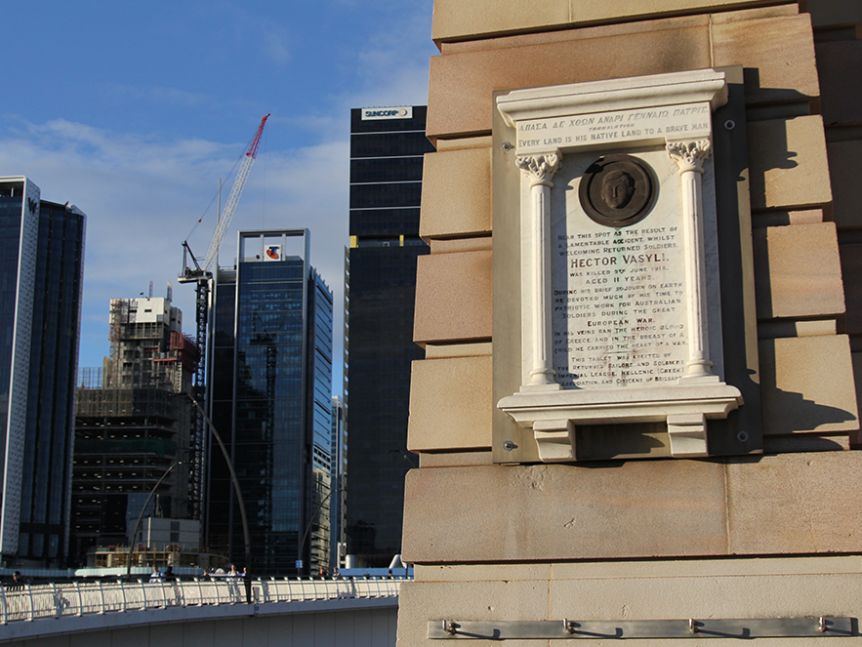 She said he lived on a busy thoroughfare and would have been used to dodging trams, horse-drawn buses and the occasional car.

“He had, on many occasions, stood on the bridge and thrown cigarettes and chocolates at previous returned soldiers’ processions.

The inscription for Hector Vasyli reads: 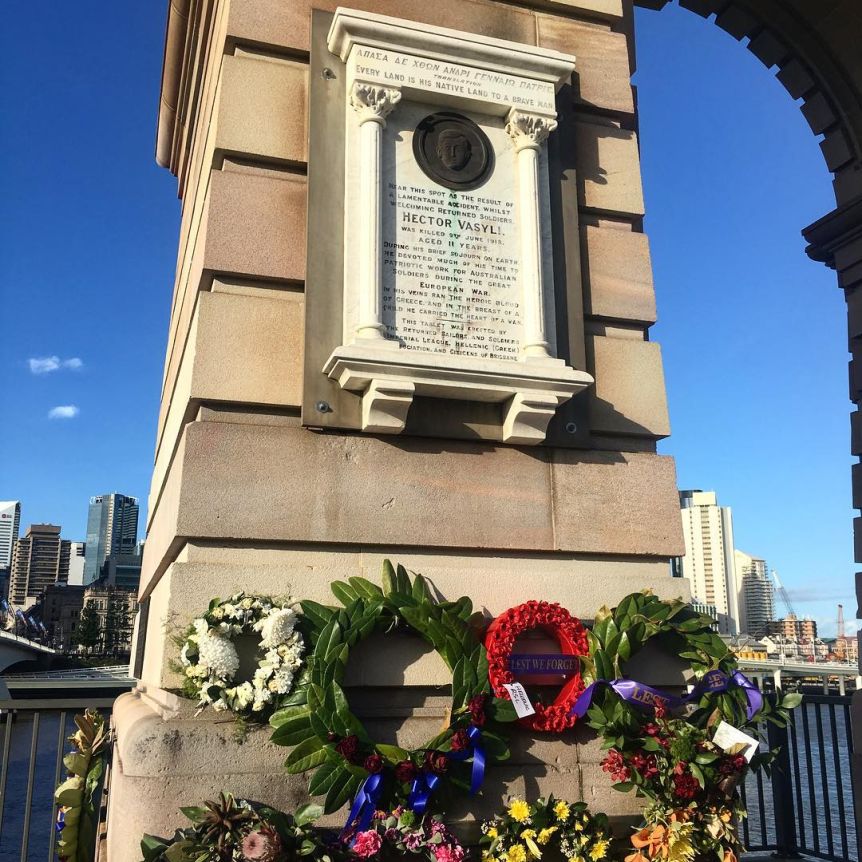 “During his brief sojourn on Earth he devoted much of his time to patriotic work for Australian soldiers during the Great European War.

“In his veins ran the heroic blood of Greece, and in the breast of a child he carried the heart of a man.”

Renowned Cypriot-Australian artist and graphic designer George Petrou* has also honoured a little-known story of patriotism and tragedy from 100 years ago – the story of Hector Vasyli. 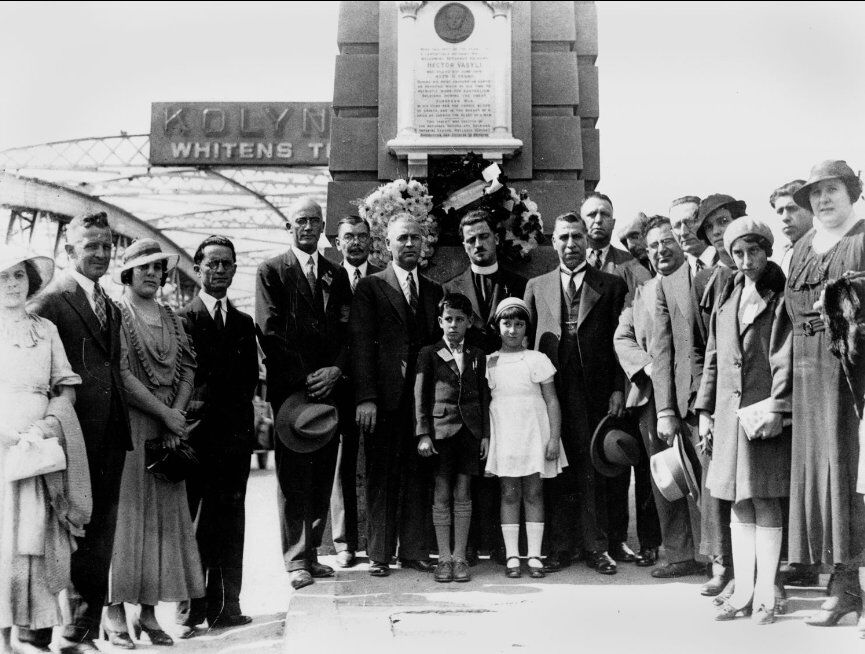 According to an article published earlier this week, George says “Here is a young boy, the son of a Cypriot migrant father and Australian mother, who was so moved by the return of the Anzacs to his native Brisbane that he wanted to make a personal welcome home. Tragically this motivation would lead to his death. This story says so much about those Australians of Hellenic background – of migration, of the joining of two stories, of the Hellenic and the Australian”.

George in fact commemorated Hector Vasyli artistically and gifted his commemorative portrait to the Museum of Brisbane.

George Petrou has been recognised for his work and services to the Australian community. He has  been recognised (today) in the Queen’s Birthday 2020 Honours List. He is  part of a larger group of 933 Australians who’s contribution to their community was noted by their peers as worthy of recognition.

George was honoured for his service to the visual arts and to veterans. He is an Artist and Graphic Designer at George Petrou Design since 1979. His works include: Twelve Great Australian Stories Collection, Sports Player Portraits, Remember Me – The Lost Diggers of Vignacourt Collection, and The Victoria Cross Collection.

He is a patron of the Totally and Permanently Incapacitated Ex-Servicemen and Women’s Association of Victoria (TPI Victoria) since 2017. He is also a supporter of The Cross of Valour Association of Australia.

Hector Vasyli – may your memory be eternal.

*George Petrou was born in Limnia Famagusta Cyprus in 1956 and his family of eight migrated to Melbourne, Australia in late 1956. He was eight months old when he left Cyprus and he is the son of Mavroloucas Petrou a renowned horse trainer and furniture maker. They all enjoyed a very happy upbringing within the Greek – Australian community.

George graduated from university in 1978 with a Degree in Graphic Design and Communication. In 1979 George took over an existing graphic design studio which he still runs to this day. In 2010 he was diagnosed with cancer. This turned his life upside down and he made a promise to himself that if he survived, he would spend a lot more time painting as a form of therapy and enjoyment.

Having a very strong interest in Australian history, which developed into a passion for World War One (WW1) history, George decided to paint portraits of those wonderful Australians who volunteered and sacrificed their lives for their country. George’s style has evolved from a strong contemporary abstract style to a more restrained style as he needed to show respect to the subject with limited abstraction and no distortion.

He is currently writing a book that will showcase around 80 of his military portraits as well as about 50 family members and friends writing their personal connection to the subject of a particular portrait. This coffee table book will be around 400 pages. It is expected that the book will be for sale around March 2021 with all profits going to past and present veterans suffering from PTSD.