Three years ago, I started my PhD project aiming to discuss different forms of violence that seemed to emerge during the years of economic recession in Greece.

Usually, when talking of violence, we think of the ‘mainstream’ understanding of the notion, which requires a physical attack from one person to another. 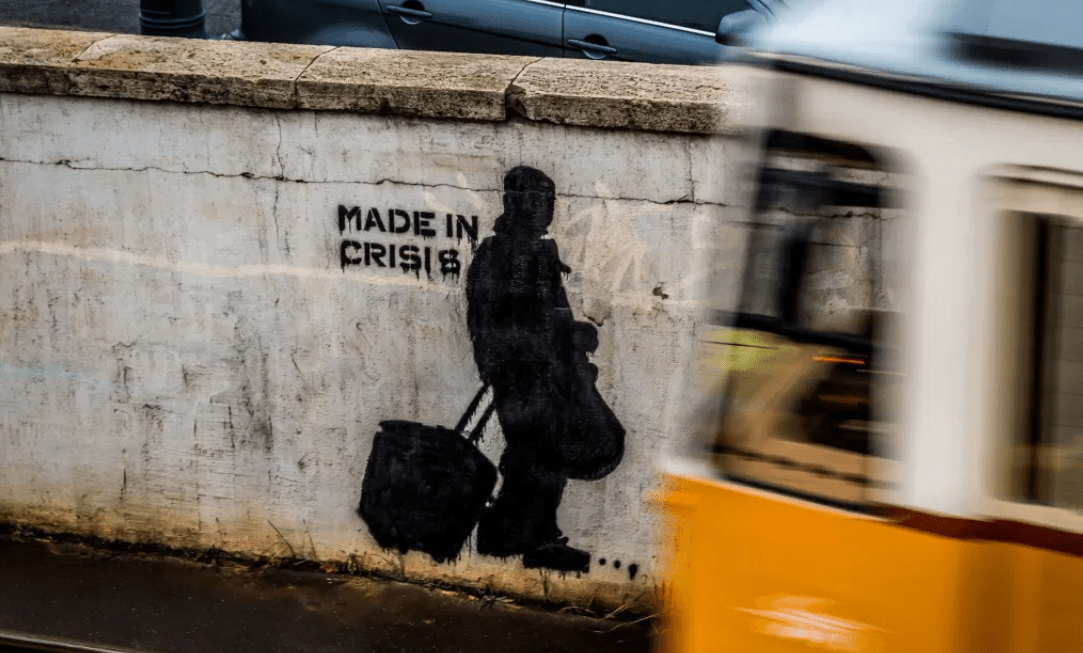 Based on literature that argues that certain politico-economic measures could be considered as violent mainly due to their effects on a specified population (see Galtung, 1969; Farmer, 2004; Cooper and Whyte, 2017; Böhm, 2018), my PhD project explores whether austerity could be studied under the conceptual umbrella of violence.

The main standing point is that austerity could be regarded as a means to impose or sustain a social order, a structure, that is harmful to certain groups of people up to the point that one can talk of violence exercised against them.

The most known form of violence that can theoretically capture the aforementioned point is structural violence.

Structural violence is generally understood as an arrangement deeply rooted in a system of relationships within a socio-economic and political apparatus that results in the restriction of enjoyment of fundamental rights to the degree that certain social groups are constrained from achieving a quality of life that would have otherwise been possible (Drymioti, 2019).

Simply put, structural violence is “the violence of injustice and inequity” (Rylko-Bauer & Farmer, 2016, p. 47), which bares consequences ‘existential and critical’ to one’s state of being, becoming, experiencing, acting and re-acting.

Structural violence is also argued to be the generator/initiator of various other forms of violence.

I do not aim to further elaborate on the different forms of violence that structural violence can generate. Rather, to suggest that we need to start understanding violence as a situation (and not merely a situational performance) in which different degrees and forms of interactions take place.

As a ‘capsule’ where dynamics are moving, changing and influencing each other based on changes in the environment and the setting (context).

Imagine different forms of violence as atoms within that capsule, adapting to new data, to new conditions, to secure their survival.

What all those forms have in common is the situation they are trapped in; the framework within which they act, they interact and occasionally re-act.

What does this introduction aim to suggest?

That once you are in the capsule, escape is not a possibility, and you need instead to find an alternative way to fight for its liberation. Escape might not be a ‘realistic’ option, but transformation always is.

And that’s the point where the essentiality of social action and resistance comes into play.

Resisting actions of whatever nature can change the dynamics within the capsule, claim space, claim channels of communication, claim rights.

A complete change is most of the time impossible.

But making small steps forward is not. And by the time you manage to occupy a space that did not belong to you in the beginning, you are in a position to negotiate.

Negotiation is key to understanding any interactive element inherent in the relationship between all actors and dynamics found in the capsule.

However, this kind of negotiation does not refer to a western democratic understanding of diplomacy. Rather, it refers to its more instinctive form; a negotiation that is derived from, and based on, survival instincts.

We almost talk of a system of negotiation.

A system that, if depicted, would be a spiral.

A spiral that is constantly developing.

A spiral defined by its continuity and repetition of actions.

One of the main arguments of the advocates against austerity and debt is that a debt will hold the debtor captivated in a power dynamic with the debtee that is difficult to overturn. A starting point that admittedly does not benefit the negotiating power of the debtor.

During the last decade in Europe, and the last 30 years in Latin America, there has been a discussion around the argument that countries that borrowed money from international financial institutions never manage to fully and sustainably recover, thus forever condemned to seek further assistance from their debtees.

It seems that the time for Europe to move further through the spiral that started with the economic recession of 2008 already came.

This time because of a pandemic that shakes the waters of the global economy again, and is expected to do so at a greater degree than the economic recession of 2008.

What we currently witness is the countries most struck by the crisis of 2008 now unable to sustain themselves during the pandemic. After a decade of severe cuts in the public sector, those countries find themselves unable to handle the current crisis.

Not merely because of the high numbers of patients, but mostly because of a lack of resources that stretched their health systems and national economy to their limits.

Most of those resources were diminished during the last decade for the sake of austerity that was meant to bring economic stability.

The current pandemic is as much a question of health as it is one of ideology, politics and economics.

It is 7 April 2020 and the negotiations for a rescue package for the countries most struck economically by the pandemic already started. Those countries are mainly Italy and Spain, followed by France.

The two most popular options are: (1) to issue ‘corona-bonds’ and (2) to introduce rescue packages through the European Stability Mechanism (ESM) that will follow the ‘memorandum line’ accompanied by memorandum commitments. The difference between the two options, very plainly explained, is that option number 1 amounts to a support based on the mutualization of debt among Eurozone members, whereas option number 2 is a ‘typical’ loan where the countries that will take it will be found conditionally indebted to the ESM.

The President of the European Commission, Ursula von der Leyen, while advocating for a sustainable ‘Marshall plan’, stated that “the billions and trillions being spent today to avert a greater disaster are an investment in our future protection and they will bind generations.”

Early in the morning hours of April 8, Eurogroup completed its marathon conference without a deal amid controversies around conditions on financial aid.

The effort for a compromise will continue on April 9.

Mário Centeno, President of the Eurogroup, says the agreement is close.

It seems that the last decade we are constantly running out of time, while we take actions that will ‘bind’ generations for an excessive amount of it.

Financial capitalism is moving fast and we are left running behind it; with a shortage of breath, like the last runner of a marathon trying to at least reach the endpoint for the sake of dignity.

The issue of time takes me back to 2013 when my home country Cyprus was negotiating for two weeks with Troika for a rescue package to overcome the crisis of 2008.

Two weeks of panic, confusion and fear – where time had stopped, but at the same time it was running out. When I interviewed officials about the agreed upon measures for the purposes of my master thesis in 2015, the majority pointed out that ‘back then, we did not really understand what the measures were about and what it meant for the economy and the society, but we were running out of time. We had to reach an agreement as soon as possible’.

This is a part of the narrative that revived four years later during my fieldwork in Greece.
‘We had to find solutions, any, quickly, because of time’.

Here we are in 2020, a decade after the first crisis of the Eurozone, to discuss again the clash between time and socially sustainable measures.

I suppose this is what usually happens in times of a crisis.
Crisis.

A moment in time where nothing is yet determined but is soon to be.

However, what is the point that a moment stops being a moment of crisis and becomes a normality?

It’s been a decade since the beginning of a relentless economic recession and close to a decade of unprecedented migratory influx in Europe.

Currently, in 2020, a third crisis hits the globe.

This time, a health crisis due to a pandemic that sows the seed for the next important crisis to come.

It seems like the past decade we are in a permanent state of crisis.

A rather critical question arises here: If what we call and treat as a state of crisis is the current norm, then is it really a ‘crisis’, or a gradually normalized state of being? Are we really passing through a moment where nothing is yet determined but soon will be, or where everything is determined and we witness its unravelling?

Unless we understand what is currently a ‘crisis’, the rise and practice of critique seems like a far-reached scope based on an archive of ‘outdated’ knowledge.

And unless we find a way to practice critique, we will be unable to negotiate.

And unless we find a way to negotiate, time will keep running out and against us.

And when time runs against us, so does violence, in any form it can take.

This article was originally published at Theatres of Crime at: Rotterdam Criminology Blog

[3] Fragment from author’s article, ‘The concept of violence in (times of) crisis: On structural, institutional and anti-institutional violence’ published in Tijdschrift over Cultuur en Criminaliteit, 2019 (9) 2.

Böhm, M-L. (2018). The Crime of Maldevelopment: Economic Deregulation and Violence in the Global South. Routledge.

Drymioti, M. (2019). The concept of violence in (times of) crisis: On structural, institutional and anti-institutional violence. Tijdschrift over Cultuur en Criminaliteit, 9(2), 52–70.

The time for solidarity in Europe is now – a concerted European financial response to the corona-crisis. (2020, April 2). European Stability Mechanism. Retrieved from: https://www.esm.europa.eu/blog/time-solidarity-europe-concerted-european-financial-response-corona-crisis