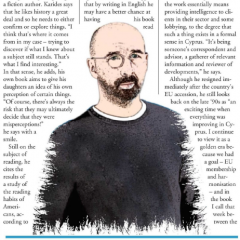 A citizen’s relationship with the voting process is contingent on their understanding of their country’s history and of the state of its politics. Above all, however, it is founded on the citizen’s notion of how they can affect change.

Citizens who vote in national parliamentary elections usually have a good grasp of their legislature’s role and work, but what prompts them to actually make the trip to the polling station is that they feel that their vote will make a difference.

Similarly, when it comes to the European Parliament elections later this month, the ninth such process since 1979, the motivation to vote is likely to hinge on one’s understanding of the history and current state of the European Union. But mostly it will depend on whether European voters feel that their vote will make any difference.

The answer is Yes, a little bit, but still enough for it to matter. And it matters because Europe matters.  As with so many things about Europe, its underrated success is matched by its understated bit-by-bit progress. It is a progress that voters have come to take for granted, not paying attention. But it does matter in almost every aspect of their lives from the economy to security and from their data protection to their environment’s protection.

These elections are emerging as an undeclared silent referendum on how much more or how much less ‘Europe’ citizens want. If they do turn out to vote in numbers it will mean that the Germans and the Greeks, the Poles and the Portuguese, and at the time of writing the British too, consider that we must address our amassing problems collectively even if elements of European decision-making remain democratically deficient.

It is true that the European Parliament itself suffers from this deficiency. Though clearly a force for good it does not yet function as a full-fledged parliament. Unlike national parliaments it has limited power in initiating legislation, a role almost exclusively reserved for the European Commission. But it matters that it is there. It is the closest Europeans have in terms of a substantive representation of the will of the people as it continues to carve its space in favour of the citizen.

But for it to begin to matter more citizens must back it by equipping it with representatives that are able to strengthen its scope and role. Had the European Parliament had a greater say over the last decade, the banking excesses and the austerity which triggered Europe’s downward spiral may have been easier to tame. The distortions of the European Council’s decisions could have been checked and a greater solidarity between member states would have been achieved.

Democratic deficits breed citizen indifference which then results in the citizens’ knowledge deficit. Britain had to suffer the post Brexit referendum ordeal to realize the deep awareness deficit that existed across the country about EU affairs. Years of deliberate neglect by successive UK governments about the European Union and its role in actually making the UK stronger made millions of British voters susceptible to outrageous lies. They became convinced that Europe didn’t matter, that it wasn’t necessary and that it was holding the UK back.

Standard Eurobarometer results from 2007 show that only 17 percent of Britons felt that they were “well informed” about EU matters. Ten years later, in post-referendum 2017, that figure was up to 47 percent.

In 2016 the majority of Leave voters had been misled by sinister, unqualified politicians who got to hijack and distort the debate on Europe. They were also let down by years of deliberate neglect from their elected governments. In contrast the majority of Remain voters knew that the Europe Union was not working but they still thought that it was good for Britain to stay in and to affect any change by participating, not by abandoning. Now, in 2019, Remainers have – within a short timespan – come to learn more about the value of the European Union than some of their most ardent federalists on the continent.

Brexit showed that an absence of awareness of EU affairs allows anti-Europeans to hijack the public debate and impose their dark narrative. These opportunistic, sinister, unqualified politicians are now everywhere, a swelling wave of nationalism at odds with the values and principles that the European Union.

It is one thing for Democracy to be deficient; it is another thing for it to be asleep. For a few decades a tired and disinterested citizenry has been hypnotised. To address the deficiencies they now have to snap into action.

Voting in the EP elections will be an affirmation of the admittedly unfashionable but still necessary process of deeper European integration against the dark forces of populism and unthinking nationalism. In this, citizens have a much greater capacity to make a difference than they may think.