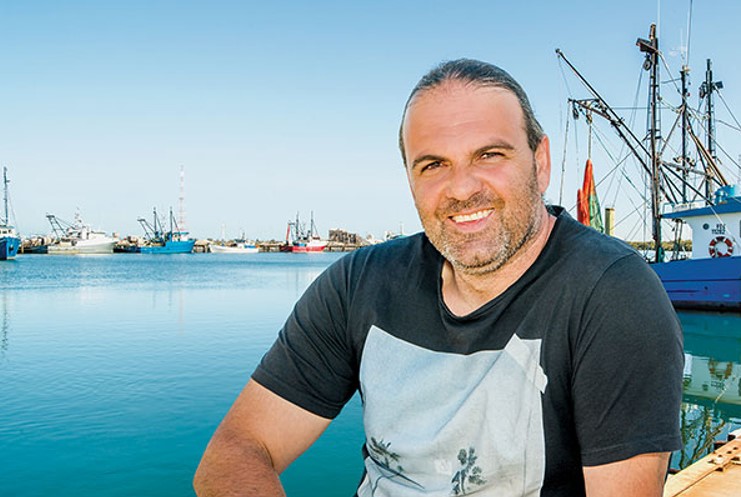 Fishing is a longstanding tradition in the Mediterranean nation of Cyprus, from which Kyri Toumazos and his family hail. And although they were not fishers before emigrating in the mid-1980s, the seafood culture from which they came, combined with Australia’s seemingly endless waters offered them new opportunities.

However, Kyri Toumazos initially chose a different career, studying pharmacy after finishing school. But just three years into his new profession the lure of the seafood sector – and his family – led him to join his uncle’s seafood processing and distribution business, The Fish Factory, in Adelaide.

In doing so, he quickly realised he was jumping ship from a highly regulated industry to an even more regulated one.

That was in 2000. For the next 13 years he worked as general manager at The Fish Factory, all the while thinking about ways to create a less rule-reliant future. “I wanted to explore options in which industry and government could move together, to improve their relationship and co-manage fisheries,” he says.

In 2014, feeling “at a crossroads” in his career, he started a new fishing business, Southern Sea Eagles, with his brothers Terry and Philios. He also took up a new role as executive officer of the South Australian Northern Zone Rock Lobster Fishermen’s Association (NZRLFA).

It was a job that allowed him to remain in the industry and close to the family business, but at the same time offered a new challenge. He says the Northern Zone Rock Lobster Fishery was also looking to try something new at that time.

“We had a traditional fishing season – we went fishing and delivered product – and we accepted whatever price the market could pay us then. But I feel that we actually need to change and move with the times. We need to deliver product to the market when the market wants it, not when it suits the fishing season,” he says.

At the NZRLFA, Kyri Toumazos initiated a proposal to research the feasibility of extending the fishing season, which might allow the fishery to adopt a more market-based approach.

Historically, South Australia’s Northern Zone Rock Lobster Fishery had been closed from June to October. This was part of a fishing ban put in place in 1966 designed to restrict fishing activity and protect spawning in the fishery, which stretches along the state’s coastline from the mouth of the Murray River to the Western Australian border.

The research was jointly undertaken by the NZRLFA, the South Australian Research and Development Institute (SARDI) and the Department of Primary Industries and Regions South Australia (PIRSA), with funding from the FRDC. NZRLFA members used their vessels to provide important data on the Southern Rock Lobster catch and bycatch for two consecutive winters, in 2014 and 2015.

The research indicated that lobster egg production and population numbers would not be affected by winter fishing because most lobsters caught during this period were male. Winter fishing could also provide some biological benefits for the fishery, such as reducing predation of lobsters in pots and reducing undersized catch.

The findings prompted PIRSA to lift the seasonal ban and introduce a 12-month fishing season from May 2016.

While there has been considerable research into resource sustainability, Kyri Toumazos says, the project looking at extending the fishing season, married research with the economics.

When Southern Rock Lobsters are traditionally in short supply – in winter – South Australian fishers have been able to access price premiums in lucrative Asian export markets, particularly in China.

“In March 2017, the average beach price of lobster caught in the outer region of the fishery was approximately $48 per kilogram,” he says. “Lobster caught in July, August and September of the same year achieved prices greater than $85 per kilogram.”

Working collaboratively with government, fishers have also introduced strategies in combination with year-round harvesting to protect the fishery resource. These include an emphasis on protecting spawning lobster, which are concentrated in the shallow inner region of the fishery.

He says fishers are spreading the footprint of their catch over a larger, deeper area within the fishery’s existing boundaries. They have overlaid the quota management system introduced in 2003 with new spatial management quotas that delineate the fishery’s outer zone and its biologically sensitive inner zone.

The total allowable catch of Southern Rock Lobster for the fishery is 300 tonnes a year, with current catch quotas for the inner and outer zones 250 and 50 tonnes respectively. These new spatial catch limits are based on annual lobster biomass estimates generated by the fisheries modelling group at SARDI.

“Traditionally, we caught less than five per cent of our catch in the outer region of the fishery, but since introducing new quotas in 2016, we have increased our fishing effort in those deeper areas,” Kyri Toumazos says.

“The inner zone of the fishery is our bread basket and we believe that protecting its spawning biomass will deliver better catch rates in the long term.”

Kyri Toumazos says transparency in the fishery’s practices is key to industry-driven changes in management, and has helped strengthen fishers’ much-needed social licence to operate in the North Zone Rock Lobster Fishery.

The successful research collaboration was named the 2017 South Australian seafood industry award winner for best research, development and extension, and was a finalist in this year’s national industry awards.

He says research is crucial in providing the tools that will allow the industry to progress. He is also involved with a new FRDC-funded research project (2014-702), testing five alternative lobster pot designs to improve the retention of full-sized lobsters. The aim is to develop a prototype for industry adoption.

One of those five designs has come from observations from the Toumazos’ fishing operations. “It features a narrower entry point, which is positioned further inside the pot so it is more complex for lobsters to exit,” he says.

In the shark fishery, the Toumazos brothers are also planning to switch from demersal set gillnets to demersal longline fishing, a move Kyri Toumazos says he expects will improve the fishery’s sustainability and profitability.

Longlines prevent bycatch issues associated with gillnets and allow fishers access to more fishing grounds. FRDC-funded research (2011-068) also found that Gummy Shark caught on longlines achieved a 15 per cent premium at markets in Melbourne during the past two years, supporting the business case for the change.

“There is an obligation out there by industry and government and all other stakeholders for a sustainable, yet economically viable, fishery. I think research – the right research – ensures sustainability and maximises profitability. We focused on sustainability for a very long time, but a lot of the projects happening now are trying to look at how you marry the two together, rather than looking at them in isolation,” he says.

But education is also an important part of the picture, he says, and is needed to support the social licence and continued community and government support for the sector. As such he spends part of his time talking with student groups at Adelaide-based universities, TAFE institutes, and primary and secondary schools.

“We need to find ways of educating the community that we are professional, responsible operators and encourage understanding that we are custodians of the marine environment and the public’s fishing resource.”