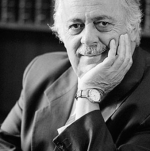 George Bizos is a prominent human rights lawyer who campaigned against apartheid in South Africa, most notably during the Rivonia Trial.

Bizos joined the Bar in Johannesburg in 1954.

During the 1950s and 60s he was counsel to a wide range of well-known people including Trevor Huddleston of Sophiatown.

At the Rivonia Trial in 1963–64 he was part of the team that defended Nelson Mandela, Govan Mbeki and Walter Sisulu. The defendants were sentenced to life imprisonment, but spared the death penalty. Although it is sometimes said that he claims to have drafted Mandela’s famous speech spoken at the trial, he says that his main contribution was to advise the use of the words “if needs be” before Mandela said that he was prepared to die.[3] Bizos believes that this may have contributed to the avoidance of the death penalty by having Mandela not appear to seek martyrdom.

Bizos was counsel at various inquests into the deaths of people in detention.

He has been a senior member of the Johannesburg Bar since 1978. He is a member of the National Council of Lawyers for Human Rights, which he helped found in 1979. He is Senior Counsel at the Legal Resources Centre in Johannesburg in the Constitutional Litigation Unit. He was a judge on Botswana‘s Court of Appeal from 1985 to 1993.

In 1990 he became a member of the African National Congress‘ (ANC) Legal and Constitutional Committee, and at Convention for a Democratic South Africa (CODESA) he served as advisor to the negotiating teams and participated in drawing up the Interim Constitution. He was involved in the drafting of legislation, and particularly the Truth and Reconciliation Bill and amendments to the Criminal Procedures Act, to bring it into line with Chapter 3 of the constitution, guaranteeing fundamental human rights to all citizens of South Africa.

In the Truth and Reconciliation Commission hearings, he was the leader of the team that opposed applications for amnesty on behalf of the Biko, Hani, Goniwe, Calata, Mkonto, Mhlauli, Slovo and Schoon families. He was appointed by then President Mandela to the Judicial Services Commission which, in terms of the constitution, recommends candidates for appointment as judges and proposes reforms to the judicial system to erase its apartheid past. Bizos was the leader of the team for the South African Government to argue that the death penalty was unconstitutional, and counsel for the National Assembly in the Certification of the Constitution by the Constitutional Court.

In 2005, Bizos was legal advisor to Nelson Mandela in a bitter legal dispute with Mandela’s former lawyer, Ismail Ayob.