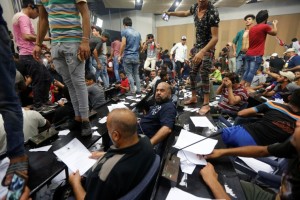 The recent storming of Baghdad’s heavily fortified Green Zone by protesters led by Shiite cleric Moqtada al-Sadr brought to the surface a long-standing dilemma: the system which has governed the country since 2003 is in need of radical reform, but because the ruling political class has in many ways come to embody the system, it is highly resistant to genuine change.

Street protests and recalcitrant politicians have created a combustible formula, paralysing state institutions and threatening to bring them down.

Meanwhile, the security situation is dire, as evidenced by a series of attacks in Baghdad this week claimed by the Islamic State…

Source: Iraq: On the Edge of Chaos | Crisis Group