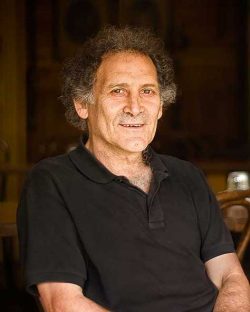 Arnold Zable is an award winning writer, storyteller, educator, and human rights advocate. His books include Jewels and Ashes, (Scribe, 1991) which won five Australian literary awards, and depicts his journey to Poland to trace his ancestry. Jewels and Ashes was also published in the USA by Harcourt Brace in 1993. Wanderers and Dreamers, (Hyland House, 1998) is a book of tales that depict the history of Yiddish theatre in Australia. Zable’s best selling novel, Cafe Scheherazade, (Text, 2001) depicts the lives of former refugees who now meet in a coffee shop in a seaside suburb in Melbourne. The Fig Tree, (Text, 2002) is a book of true stories set in Greece, Eastern Europe, inner Melbourne and outback Australia. The Fig Tree CD, a musical companion to the book, won the National Folk Recording award in 2004. His novel Scraps of Heaven, (Text, 2004) is set in the post-war immigrant community of the Melbourne suburb, Carlton. His latest novel Sea of Many Returns, was published by Text in June 2008. Arnold Zable’s most recent book, Violin Lessons was published in August 2011 to critical acclaim.

Formerly a lecturer in the Arts Faculty in Melbourne University, Zable has worked in the USA, Papua New Guinea, China, and many parts of Europe and Southeast Asia, Zable is the author of numerous feature articles, columns, short stories, reviews and essays. His work regularly appears in The Age and a range of journals. He has written several works for theatre, and was a co-writer of the play Kan Yama Kan, in which asylum seekers tell their stories. Zable speaks and writes with passion about memory and history, displacement and community. He has conducted numerous writing workshops and has been a visiting lecturer in creative writing at Deakin, Melbourne, Monash, RMIT, La Trobe and Victoria Universities.

Zable is a compelling storyteller who has performed in many venues in Melbourne, Sydney, Perth, Hobart, Adelaide and regional areas. His shows include Wanderers & Dreamers, tales of Yiddish theatre, and more recently, Anytime The Wind Can Change, tales of immigrant journeys, performed with singer-songwriter Kavisha Mazzella. In 1998 he worked with curators to produce the script for Victoria’s Immigration Museum.

He has conducted writing workshops throughout Australia, and worked with refugees, immigrants, the homeless, the profoundly deaf, Black Saturday bushfire survivors, problem gamblers and other groups using writing as a means of self-understanding and healing.

Zable is a patron of Sanctuary, the Eastweb Foundation and the Victorian Storytellers Guild, a former member of the Immigration Museum Advisory Committee, and President of International PEN Melbourne. He was recently awarded a doctorate in the School of Creative Arts, Melbourne University and in 2012 was appointed a Vice-Chancellor’s Fellow at Melbourne University.