Barbie sought out opponents of the Nazis in Holland, chasing them down with dogs.

He had worked for the Nazi mobile death squads on the Eastern Front, massacring Slavs and Jews. 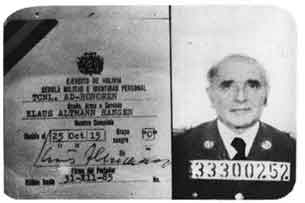 He’d put in two years heading the Gestapo in Lyons, France, torturing to death Jews and French Resistance fighters (among them the head of the Resistance, Jean Moulin. )

After the liberation of France, Barbie participated in the…