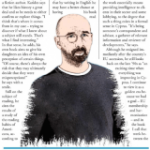 Born in the 4th century BCE of Phoenician descent he was known as Zeno of Citium the Hellenic kingdom on the island’s southern coast where today lies the city of Larnaca.

Citium, though a largely Hellenized city, retained a sufficient Phoenician component in its culture to earn Zeno the nickname ‘the Phoenician’. 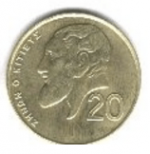 His connection to Cyprus is widely documented, even if just footnoted, and it is acknowledged even if it is not that well known outside academia and students of Stoicism.

For those familiar with London, Zeno Bookshop on Denmark Street used to be a landmark showcase of this Cypriot connection. A short walk across from Foyles on Charing Cross Road it was the best-known bookseller and publisher of Greek and Cypriot books in Britain a key attraction for classicists and students of Greek.

Yet, even though the association can still inflate Cyprus’ historical pride, Zeno’s presence in Cypriot letters and culture remains subdued, uncharacteristically under-exploited, almost decorative. Probably because in reality it is feeble. But the reasons may run deeper.

The association suffers in part from the fact that Zeno was only born in Cyprus; he never actually taught there. He was, so to speak, ‘ours’ but not ‘one of us.’ The school he established in Athens under a roofed colonnade (Stoa) taught that logos, universal reason, was the greatest good and that placing it at the centre of life provided for a worthwhile existence.

Praised by Athenians for his temperance and consistency in living what he taught, refusing to compromise his principles for what society valued, Zeno also laboured over how the principles of self-control, devotion to duty and public spirit could shape an ideal society.

The Cypriot historian Costas Kyrris even linked Zeno’s ideas to the vision of a united Europe. In 2013, Cyprus was already a decade into its EU membership, but was reeling after the global financial collapse. Desperate to raise funds its government formulated a citizenship scheme aimed at high net worth foreign individuals and investors. Anyone seeking a Cypriot (and EU) passport could simply invest 2 million euros in the Cyprus economy and meet certain other criteria including a Clean Criminal Record.

The “golden visas scheme” though perfectly lawful and indeed implemented in other European countries, evolved into a considerable reputational problem as internationally wanted criminals, sanctioned business people, and politically exposed persons ended up with Cypriot passports.

Approximately 7 billion euros flowed into Cyprus channeled mainly into real estate. Cyprus’ landscape is now a distasteful patchwork of grandiose property developments and ill-fitting skyscrapers. Many are known to have trampled on planning and environmental regulations. And it is here that the fault line of disconnect between Zeno’s philosophy of restraint and modern Cyprus’ economic philosophy widened ominously.

A hostage to its geography Cyprus had often been hit by the ruthless whims of history’s powerful players. Crippled by Turkey’s occupation of part of its territory since 1974 it suffered – one could say stoically – by keeping its head down and slowly rebuilding itself.

In the 90s its economy grew and its inherent European democratic credentials were strengthened by EU accession. But by the turn of the millennium its agricultural and industrial sectors withered as its financial services and tourism sectors boomed. The financial meltdown exposed the weakness of its economic model. Instead of a total rethink the political establishment capitulated to short-termism and the impulse of the quick buck.

A tradition of political partisanship and nepotism was made worse by corruption and conflicts of interest. With the sale of passports the country’s economy fell prey to local opportunists and shady foreign saviours exposing the country to allegations of money-laundering.

The old ethic of hard work and silent suffering disintegrated in the face of hard cash and silent partners. Where Zeno’s Stoicism valued moderation, courage, justice and wisdom, modern Cypriot economic and political life drifted towards excess, deceit, amorality and ignorance. Where Zeno argued for the ideal community to be ruled by the competent and sage (οι σπουδαίοι), Cyprus’ political class – to be fair, like in many once great nations these days – colluded with the money suppliers and was inevitably infiltrated by self-seeking populist mediocrities, of the type whose resignations the country is now witnessing.

The dynamics of modern statehood and the vicissitudes of the global economy cannot of course be addressed by the obscure musings of a philosopher who lived 2300 years ago. In any case Zeno was overtaken by his Roman disciples Epictetus, Seneca and Marcus Aurelius who have since dominated Stoic discourse. While western European thought absorbed their teachings Cyprus fell behind; the Romans did not fit that comfortably with Zeno’s original Cypriot-Greek profile. Confounded also by the dominance of Greek Christian orthodox dogma Stoicism’s more secular rationalism found little space within Cyprus’ nationalist religious narrative. Zeno was confined to coins, crests and nomenclatures.

The Cypriot government has now suspended the citizenship scheme and is tracing dozens of problematic cases of investors that acquired citizenship. But the revocation of a citizenship turns out to be as tricky as renewing a dead philosopher’s passport.

The deeper irony lies in that the country would now benefit from a return to Zeno’s logos and a strong injection of Stoic inspired reform.

A return to the founder’s fundamentals would not only begin to relieve Cyprus’ post-scandal angst, it would actually help it chart more ethical and sustainable economic policies.

Perhaps even begin to fix its tarnished image.