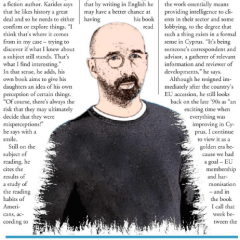 I don’t really, but as I don’t have Facebook or any other social media account, she knows that when I am staring at my smartphone it is mainly because I am on Twitter.

For the record my smartphone informed me on Monday, as it diligently does every week, that my average screen time was down 9 percent and had overwhelmingly been spent on what it describes as “Reading and Reference”. On Twitter, obviously.

Twitter is as ephemera as it gets and it is definitely not television yet it is where the majority of the best newspapers, publishers, journalists, writers and thinkers choose to bring their work. Often, they do it with running commentary of their thought processes. When was one ever granted that kind of access? Inevitably everything they put out there ends up taking a life of its own but don’t all narratives suffer that fate once they leave the author?

Sure, fleeting tweets and their ‘threads’ seem chaotic and menacing for the uninitiated. But just as you don’t watch vacuous television programs you have the option not to follow vacuous Twitter accounts. Clive James objected to Raymond Williams’ view that television’s flow became homogenized into “a stream of uniform unmeaning”. As tempting as it is to apply that view to Twitter’s linear life, those who use it know it is more varied and certainly more complicated than that.

For those who elect to confine themselves in (let’s call them) rational information bubbles it can also prove nourishing: To follow a Hannah Arendt Center seminar or a London Review of Books analysis or to explore the recommendations from The Orwell Foundation is a big deal. Indeed, to follow the thoughts of academics or journalists like Fintan O’Toole, James O’Brien or George Packer are not opportunities to be frowned upon. You wouldn’t dream of such access in 2007 let alone 1977.

Such destinations are hubs of knowledge which, I have come to realise, cannot be that different from the new norm of online education that universities are offering students. Post Covid-19, remote teaching processes deliver a type of learning experience that is not unlike participation in seminars run by an institution you select to follow on Twitter (or elsewhere of course). It’s just that there’s no degree at the end.

According to Omnicore, Twitter boasted 330 million monthly active users last year, 40 percent of which use the service on a daily basis. This pales in comparison with Facebook’s 1.5 billion daily users but it is important to highlight that 63 percent of Twitter users are between 35 and 65 years old and that 71 percent say they use it to get their news.

Journalists now make up nearly a quarter of all verified accounts on Twitter. As the Covid-19 crisis deepens, writers and journalists who might find themselves out of contract will turn to it more intently to remain visible and relevant.

However, it is fair to say that Twitter has aggravated the distortion of the public debate. It remains populated by Vladimir Putin’s trolls and Donald Trump’s alt-right crowd, though Twitter is fast removing millions of fake and extremist accounts. Disinformation delivered the havoc of the 2016 US election result but aside from a more effective rules-based system and tighter verification by Twitter itself, it is greater media literacy that is needed. Readers, not just Twitter users, must be helped to learn to discern the real from the fake, quality from garbage.

Speaking of which, most of us may be sick of POTUS’ tweeting, but rather perversely, we would never have thought that we could gain such direct access to the inner thinking – however shallow – of the president of the United States. Of course, the juvenile that Trump is means that his remarks misfire grammatically and he resorts to non-alphabetical symbols to convey his petty thoughts. His prose is by no means a service to Twitter literature but some of the reaction he provokes comes close. Criticism from learned followers is often so devastating and well-crafted and captures the zeitgeist in a way that is unique to the medium.

Much like the constraints of a cartoonist’s frame, Twitter’s 280-character limit offers endless potential for the dedicated user. It is a difficult form and there are tricks to the succinctness required. Some writers negotiate the medium’s limitations masterfully to deliver meaningful comment.

This is not to imply that Twitter has any grand literary purpose but, like it or not, it has asserted itself as part of our political and media culture and demands a critical eye. It might be useful to remind ourselves of the skepticism that confronted early television and consider how readily today we consume so-called reality TV and binge on Netflix dramatizations.

Productions that blend historical fact with fanciful creativity and are supported by ‘reconstructed’ dialogues don’t just walk the thin line between the factual and the fictional. They create distorted narratives that end up entering public consciousness becoming as dangerous as Twitter’s worst failings.