Ekrem İmamoğlu may have prevailed in Constantinople local elections, but this would not have any impressive impact on Turkish politics.

There is no doubt that his victory has a very strong symbolism, but no direct consequences on the so many open political fronts in Turkey and beyond. 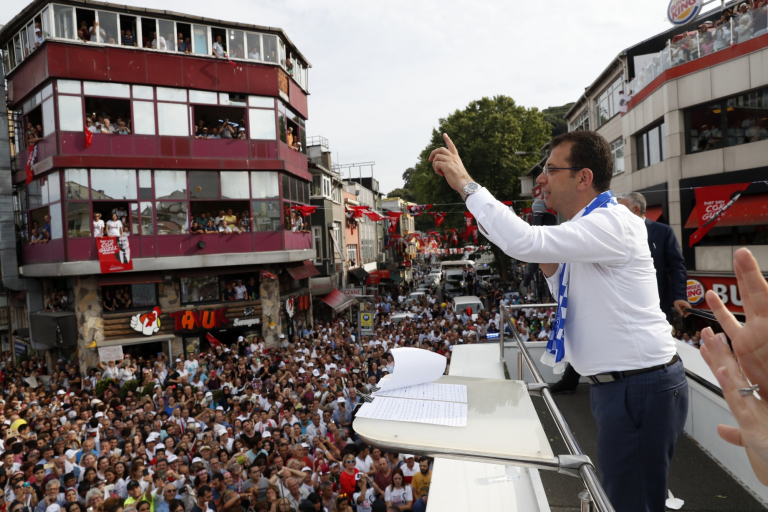 Electoral results usually have an impact on domestic politics and sometimes on foreign policy when they are carried out in advanced democracies.

When it comes to foreign policy however not much change is effected by elections or by the political or ideological traits of individuals. Political change is a complex process that intertwines individual, societal and systemic variables and dynamics.

It is perhaps time for some people in Europe, the US and generally the Western world to stop seeing what they would want to happen or change in Turkey, but see what really happens there. With regard to Constantinople elections, this is a historically cosmopolitan city, which demonstrates some interesting cultural variations from the rest of Turkey. These historical and cultural dynamics however have been suppressed quite effectively by the Kemalist regime and the violent, monolithic model of turkishisness Kemal imposed on Turkey as the prevailing nationalist ideology in early 20th century. At a cultural level, Constantinople shall never stop however reviling its reaches and its many peculiarities. Politically, it may not deviate that dramatically from the prevailing ideology of the elites, but there is an embedded power of cultural resilience and resistance which emanates from its cosmopolitan past. This is always there. In certain moments, the city seems to have a much stronger cultural power that may be able to bend the will of the prevalent political elites.

Erdoğan’s fate will not be judged by results in local elections. Turkey’s shift towards radical Islamism, as well as the imposition of a monolithic, authoritarian regime has profound historical, cultural, economic, social and political roots in the broader Turkish society. Erdoğan exerted some charismatic political attributes that helped him to awaken a new Ottoman Utopia across the people of Turkey. That imaginary political realm is both a cultural and a political identity that will not disappear overnight.

Since the founding of the Turkish state in 1923, Turkey has always been as quite fragmented society. Ataturk imposed a model of oppression, which survived more than half a century. In the last twenty years or so, that oppressive regime of enforcement is transformed into what came to be known as Erdoğanism (akin to Kemalism). Quite a few ethnicities and communities in Turkey are under the same trouble under a regime which they see it different in only nominal terms. In fact Turkey would not be able to survive as a unitary and united state under democratic, multicultural governance. This is well established and extensively discussed in the literature for a few decades now. The instincts of enforcement, violence and human rights abuses are unfortunately embedded in the psyche of the Turkish political elites.

It would be a truism to say that no one can predict the future. But if one sees the situation through the history and lens of political science, what should be expected is a major transition crisis after Erdoğan yields power, whatever the way this will happen.  Only if Erdoğan’s successor would be able to perpetuate an authoritarian regime will the transition be smooth and stable. All institutions in Turkey have been transformed into person(Erdoğan)-centered and deeply Islamic. Such a regime cannot be undone easily or without trouble. After all, to instill this regime upon the Turkish society, Erdoğan used some brutal and violent means of repression.

With regard to Cyprus and Greece, where there is an ongoing debate on the issue, there will be no consequences emanating from this or a future electoral result. Turkey’s revisionist and aggressive policies are enduring, cross-party and inter-political. Cyprus and Greece can invest very little in a benign foreign policy change in Turkey due to a change of political personalities. They may however invest in changing the power structure in the Eastern Mediterranean and the Aegean, at interstate, European and allied levels. Only under a different power balance could there be a reassessment of interests and intentions on the part of Turkey and thus a serious political negotiation over a better relationship.

Finally, Europeans, Americans and generally Westerners should not be overexcited on the recent election results in Turkey. If the intention is to help democratic social powers in Turkey to instigate a progressive, pro-European transformation, the work must continue in multiple fronts. There must be active engagement with the Turkish society and a really tough approach to the illiberal, authoritarian regime of Erdoğan.

That doctrine must be contained by very serious initiatives and actions.