Minister for Europe and the Americas,

TURKISH LATEST INVASION OF THE REPUBLIC OF CYPRUS (EEZ)

I refer to your latest reply to (Labour) Rt. Hon  Bambos Charalambous’ question in the House of Commons on 14 May 2019 regarding the latest aggressive Turkish action in invading this time the EEZ of the Republic of Cyprus.

Will the Minister join me in condemning the decision of the Turkish Government to begin drilling for oil and gas in the territorial waters of Cyprus, which not only jeopardises the chances of a successful resumption of the peace talks but risks a return to open conflict? Will he call on Turkey to immediately withdraw its drill ships from Cyprus’s exclusive economic zone? 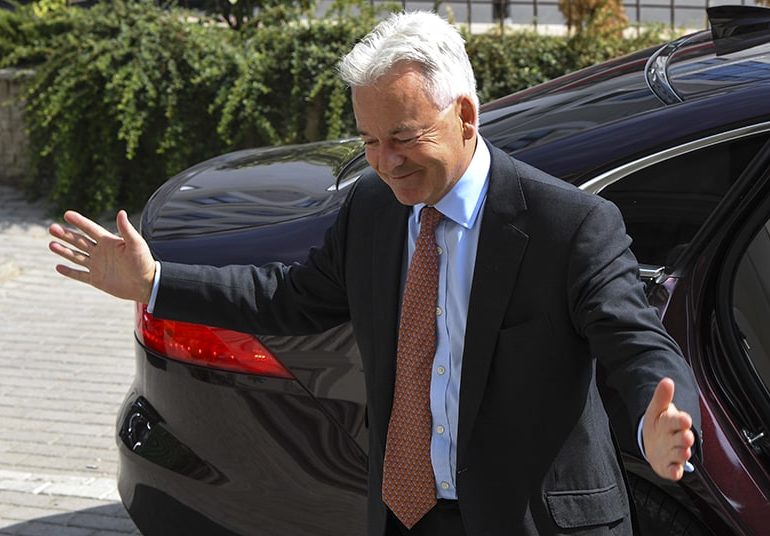 Yesterday, I met the Turkish ambassador and had very constructive discussions with him. The position of the UK is that, in line with the UN convention on the law of the sea, exploratory drilling should not proceed in any area where sovereignty is under dispute.”

Your reply was not given in a … coffee shop or in a gossip column. It was a well calculated response, pre-prepared in the Foreign and Commonwealth Office having had the question well in hand in advance.

Therefore, your official statement rightfully has outraged our community in the United Kingdom, our co-patriots in the Republic of Cyprus and the Government of the RoC and not only.

You said that you saw the Turkish Ambassador the day before. This reference appears to give a negative impression i.e. that what the British Government supports is accepted by the Turkish Government. Hence the on going reluctance of the British Government to CONDEMN such an aggression towards a country member of the Commonwealth and to which the UK is still a guarantor power for its sovereignty and territorial integrity,  goes on to reinforce this.  Furthermore this meeting  with the Turkish  Ambassador 24 hours before your reply in the House of Commons unfortunately  is reminiscent of two previous similar actions of FO ministers in history  that have harmed bitterly the people of Cyprus and subsequently the RoC.  The first was on 16 December 1956 when the then Colonial Secretary Lennox-Boyd rushed to Constantinople to meet with Turkish PM A. Menderes where the latter actually dictated to him what he wanted him to say 3 days later in the House of Commons. And on the 19th December 1956 Lennox-Boyd did just that, he promised to Turkey that in the final solution they would not exclude partition and give separate self-determination to a minority of 18% Turks on the island.  Rightfully justified the article by Randolph S. Churchill published in advance in The Spectator on 13 July 1956, entitled “Our Turkish Foreign Secretary” ( Spectator ) to which Lena Jeger MP referred to in the House of Commons Debate on 19 July 1956. (British Foreign Office released documents in the National Archives at Kew refer).

The second was on 17 July 1974 when the then PM of Turkey B. Ecevit arrived here with half of his military and political personnel and agreed with the then Labour Government of Harold Wilson and Foreign Secretary James Callaghan to  go ahead with the Turkish invasion. They colluded with him and gave him the green light provided he did not disturb the British Bases.  J. Callaghan two years later admitted to the Parliamentary Select Committee that they actually  colluded with the Turks for a change of status in Cyprus splitting the RoC into two constituent states via the racist, apartheid bi-communal, bi-zonal federal solution… Still trying for 45 years. (British Foreign Office released documents in the National Archives at Kew refer).   Your actions seem to  have a lot to do with that still unfulfilled prospect…

You stated that “the position of the UK is that, in line with the UN convention on the law of the sea exploratory drilling should not proceed in any area where sovereignty is under dispute.”

The EEZ/continental shelf of the Republic of Cyprus is not under dispute. It is the Turks who are attempting to drill in the EEZ of the RoC, whose EEZ  has been already delimited with Egypt and has been accepted by the United Nations. It has also been accepted by the USA, France and Italy that sent their private companies to explore the EEZ of the island, ignoring the Turkish threats.

I further quote here a response to your statement by Energy Minister of the RoC Yiorgos Lakkotrypis  on the evening of 15 May 2019, given to an audience  of investors and entrepreneurs in London, regarding  Turkey’s incursion into the EEZ. And which he told them was “not the first provocation (by Turkey) we are having, but by far the most serious one”.

This also as a response to the FCO’s  claim that “the area Turkey is threatening to start drilling has not been delineated, therefore under the law of the sea it is considered still “under  dispute”.

“The spot where Turkey is trying to drill is 37 nautical miles off the coast of Cyprus. I am wondering if anyone under any circumstances through the UN Convention on the Law of the Sea (Unclos) can consider this area, 37 nautical miles from the coast, a disputed area,” said the Cypriot Minister, pointing to a map of Cyprus’ EEZ.

Relevant are also the statements made today (16.5.2019) by International Law expert  Dr. Nicholas Ioannides, during a panel discussion of this item on  Cyprus Sigmalive TV.

“From the moment that the Republic of Cyprus – just as any costal state – have a continental shelf that is an inherent feature, the position of Great Britain is not accurate. The Turkish drilling rig is positioned at 36 nautical miles, very near Cyprus, and it cannot be disputed that it is within the continental shelf of the RoC and its EEZ and whilst it is positioned 83 nautical miles from the shores of Turkey”, he said.  Dr. Ioannides characterized as unfortunate the British statements and said that the term “under dispute” is not accurate, since in the theory of international law the term used is “uneliminated”.

The British Bases in the RoC

If there is anything under “dispute” that is the status of the British “Sovereign Base Areas” on the soil of the Republic of Cyprus. I remind you of the recent UK Supreme Court’s deliberation in the case of Ramadan Bashir and others (Respondents) v Secretary of State for the Home Office (Appellant) of 30 July 2018. (Honourable Judges  Lady Hale, President, Lord Mance, Lord Kerr, Lord Wilson, Lord Sumption, Lord Reed and Lord Carnwath.)

The court rejected the Home Office claim that in 1960 the SBAs became “new entities” and ruled that they constitute colonial remnants :

«The Sovereign Base Areas of Akrotiri and Dhekelia consist of those portions of the colony of Cyprus that were not established by the Cyprus Act 1960 as the Independent Sovereign Republic of Cyprus and remain within Her Majesty’s sovereignty and jurisdiction. They [i.e. the SBAs] are to be regarded, therefore, as constituting a colony acquired by conquest or cession as from 5 November 1914.»

Hearing your statement in the House of Commons,  the President of the RoC Nicos Anastasiades has revealed that this was not the right stance expected from Great Britain with all its interests in the RoC  and the support it received from  “little ” RoC  during these critical times it is going through (with Brexit) and which “were unprecedented”!

The FCO and you personally are under immediate obligation to rectify with an official statement in the House of Commons so that your statement recorded in the Hansard is corrected with a revised statement with a clear position over this issue and  condemning  the latest Turkish aggression against the RoC and its legitimate rights. The response given to Rt. Hon Mike Freer MP on the 14.5.2019 is unclear and ambiguous.

His Excellency the High Commissioner of the Republic of Cyprus in London Mr. Evripides Evriviades

Mr. Christos Karaolis, President of the National Federation of Cypriots in the UK