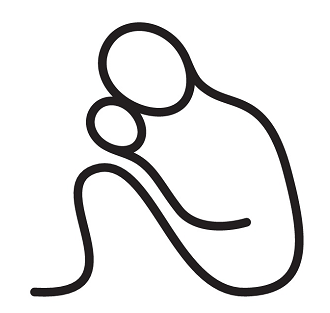 One day at Agkalia *(Embrace) we encountered group of seemingly tough young men.

They set themselves apart from the other groups with the families and were just sitting around and loitering making comments about the volunteers, all kinds of insinuations about the women volunteers, and in general: they looked like trouble.

When we started giving away food they did not wait in line.

They cut in and grabbed it.

At some point we had to carry large boxes and although other young men rushed in to offer help they stood far away, making fun of us.

By the time people had eaten and things had slowed down it was already evening.

Everyone found a place to sleep. We gave blankets to the families, Katerina was busy with a baby that had to be taken to the hospital, and the rest of the volunteers had already left.

The tough guys announced they were not sleeping at Agkalia but they would leave and go to the city of Mytilene on foot.

Truth be told, we were relieved.

Let them go now so that they do not cause any trouble overnight.

I approached the guy that looked tougher than the rest “are you leaving?” I asked.

Something prompted me to probe these tough guys.

Perhaps it was the fact that all of us were now beyond the limits of exhaustion and were just numb.

“You have no socks” I pointed out.

Indeed, he was wearing a pair of torn, disgusting shoes and no socks.

“Wait a minute, I will bring you a pair of socks because you cannot walk like this all the way to Mytilene. You will suffer.”

I fetched a pair of socks a few oranges and bottles of water for the entire group.

“Be careful. Walk in line and turn on your cell phones every now and then if you are in the forest so that car drivers see you walking and don’t injure you.”

I shook their hands and they returned the handshake rather awkwardly.

I patted the guy’s back and as I turned away he grabbed my hand.

In all honesty, I thought I was going to be attacked.

I have no way to explain what followed next.

I do not know what it means.

I just feel that it needs to be recorded as one event among the many I have recorded here all this time.

Still holding my hand the tough guy talks to the others.

This took quite some time.

I was panicking and attempting to disengage.

He kept showing my car.

I thought, they are going to steal my car and leave.

And then using any English he knew he touches my shoulder and says “friend wait a moment please.”

The group started unloading all the boxes that the other refugees had helped us load earlier.

Every refugee in the camp who was awake was simply watching without any sign of fear.

So I stood there to observe this strange spectacle.

As soon as the entire car was unloaded the “leader” of the tough guys loaded it all back by himself.

“He is saying he is sorry” responded another from the group.

When he finished loading the boxes back the strangest thing happened.

He came up to me, took the socks out of his pocket and kissed them and then kissed my hand.

“Never, no person is good to us” he said in broken English.

And then he signaled the group that it was time to leave.

Before they disappeared in the darkness some of them kept turning kissing the oranges and smiling.

Look I do not know who these young people were.

I do not know what they have done; maybe they have committed crimes.

Maybe they are just teenagers pretending to be something.

And I am not sure I want to say anything specific with this story other than this phrase that will now always stay with me because I was there and I witnessed it: “Never, no person is good to us.”

“Agalia” operates since the early 00’s dealing with the refugees and asylum seekers in Lesvos, years before the issue became international news. The organisation was recently awarded with the Raoul Wallenberg prize from the European Council of the EU.